Could the city of Pasadena finally be close to adopting an ambitious mobility plan?  This week, my friends at the Pasadena Complete Streets Coalition (PasCSC) attended meetings with city officials to provide feedback on elements of a new mobility plan that, if implemented, will make getting around Pasadena on foot and by bike much easier and safer.  The first of those meetings was a preview of potential new bikeways in Pasadena.

A year ago, in the wake of the tragic death of cyclist Phillip O’Neill in the city, a group of local advocates met and formed PasCSC to lobby for safer streets for all road users (“complete streets”).  As part of that effort, the group was critical of the Pasadena DOT’s draft mobility plan as not going far enough to make Pasadena bike and pedestrian friendly.  Several members of the City Council, including Mayor Bill Bogaard and Councilmember Terry Tornek, called on DOT to revise its bike plan and “be bold.”

On June 24, community members got a sneak peek at a “Bikeway Analysis and Feasibility Study” that assessed the feasibility of major street redesign on up to seven east-west corridors and four north-south corridors in Pasadena.  The study was conducted by KOA Corporation, a transportation planning and engineering firm that has designed, among other things, the highly regarded 3rd Street and Broadway Cycle Track in Long Beach and the new Rosemead Cycle Track in Temple City, the first of its kind in the San Gabriel Valley. 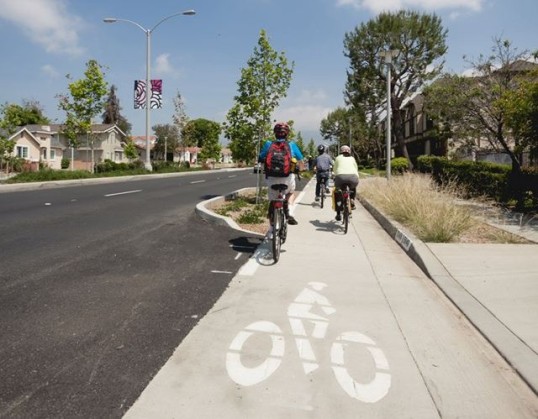 Cycle tracks are essentially bike lanes protected by a physical buffer, such as a curb, landscape planters, or parked cars.  They are common in Europe and have just begun to be used here in the US.  They are, if you’ll excuse the automobile metaphor, the Cadillac of bike lanes.  Rich Dilluvio, senior transportation planner for Pasadena’s DOT (see photo, top), asked the advocates for feedback and to prioritize the proposed routes that would be most valuable to cyclists as the initial backbones of a bike-friendly Pasadena.  Planners wanted to know, in other words, in case they’re not all funded at once, which ones did bicyclists want to be completed first?  I confess, I want them all—now, but I know that it will take time to work its way through the political process, the community outreach process, the funding process, and finally, the construction process.  I also realize they may not all be funded immediately.  The sooner we get them, though, the better for active mobility and traffic safety in Pasadena.

Readers will know that I’ve been critical of Pasadena’s previous bike plan, but my initial response to these new proposed bikeways is cautious optimism.  The east-west routes are especially ambitious, including plans for separated, bi-directional bike lanes on Green and Union, as well as proposed cycle tracks or buffered bike lanes on other routes. The north-south routes are a bit more difficult because they need to be routes that cross the 210 freeway (the huge concrete traffic sewer that cuts through the heart of Pasadena like a jagged gouge carved out of the city’s midsection) and don’t have high traffic volumes.  These constraints limit north-south routes, and they tend to be narrower streets.  For these north-south corridors, KOA Corporation engineers have proposed four “bike boulevards” that will be designed to minimize automobile volume and speed, and prioritize bicycle travel.  Similar treatments have been done on streets in Portland and Minneapolis, two of the most bike-friendly cities in the US.  A pilot for such treatment has also been implemented on Pasadena’s North Marengo Ave. between Orange Grove and Washington.  In addition, DOT director Dilluvio indicated that several existing streets with bike lanes are slated to be repainted with buffered bike lanes when they’re up for resurfacing.  Buffered bike lanes increase a cyclist’s comfort and safety by providing a painted “buffer zone” between the bike lanes and other traffic lanes.

This proposed network of bikeways is not perfect.  Several advocates noted that the planners seem to have paid little attention to modifying intersections.  Most collisions take place at intersections, and less experienced bike riders who feel comfortable in a protected bike lane mid-block will find themselves unprotected when they get to busy intersections.  This may reduce potential ridership, and hence the purpose of the protected bike lane.  Also, there was apparently little effort to choose key corridors that would directly connect with any of the city’s six Metro Gold Line stations, meaning commuters, shoppers, or visitors who take the Gold Line won’t be right next to the best bike routes to and from Gold Line stations.  There are still gaps: Northwest Pasadena and East Pasadena get little attention, though these bikeways are only part of the larger bike plan.  Finally there has, as yet, been little thought given to a system of wayfinding signage to help bicyclists navigate the proposed bike-friendly network of routes through town.  I am hopeful that there will be opportunity to address these issues when the entire bike plan comes up for public comment.

I have to say that these proposed bikeways, if they are funded and constructed, have the potential to be a significant step in the right direction for Pasadena, making the city a leader in active transportation in the San Gabriel Valley.  Soon it will be time for Pasadena’s elected officials to resist the inevitable boo-birds and anti-bike lane NIMBYs who will oppose any change in the current car-centric design of Pasadena’s streets and approve these proposed bikeways.  PasCSC will have to mobilize its supporters to provide support for the plan.  A healthier, safer, greener, even happier city awaits this pending test of community mobilization and city leadership.

Yesterday, Father’s Day, was a day for looking back and looking forward.  I began the day attending commencement at Cal Poly for my students who were graduating.  It is always so uplifting to watch my students achieve a goal they’ve worked so hard to attain, for many, the first in their families to obtain a 4-year college degree.  They’re just starting out, young lives full of promise and hope.  Last evening was also the memorial walk/ride for Phillip O’Neill, a 25-year-old young man whose life was also full of promise and hope, killed by a careless driver one year ago in Pasadena.  I was bearing witness in both cases.  The first fills me with joy, and affirms my hopes as an educator.  The second fills me with deep anger and a fervent desire to change our roads and our laws. 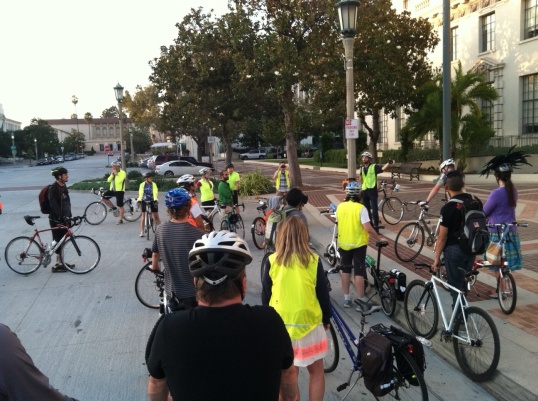 Last night’s walk/ride brought together many bicycling advocates from the area, as well as those who just wanted to ride with us in solidarity.  Chris Cunningham of the Pasadena Complete Streets Coalition led the ride, and there were attendees from as far as South LA’s East Side Riders Bike Club.  We rode from Pasadena’s City Hall, where we must press our case for safer streets, to the ghost bike placed on Del Mar Blvd. where Phillip was killed.  We stopped and had a moment of silence for Phillip, and people placed flowers and candles on the ghost bike.  I contemplated both the fragility of human life and the nearby roadway that has been designed primarily for the convenience of cars.  It’s wide enough for bike lanes, but such redesign might make drivers slow down.  As I so often do, I wondered why we let such things happen.  Why do we design our streets for machines of death that kill an average of 35,000 and maim nearly a quarter of a million Americans every year?  Why aren’t more people standing here with us?  Why aren’t more people outraged?

From there the group then rode or walked to Grant Park, where there was a small ceremony.  Katie, who was riding with Phillip when he was killed, described their beautiful first date that day, and noted that both of them were riding legally in the right lane because of the lack of a bike lane on Del Mar.  Among the other speakers was Phillip’s mother, who spoke about her son’s work as an environmental scientist and his desire to make the world a better place.  As a parent, I deeply felt her unending grief and anguish at the loss of a child.  Worse yet, she noted that her son’s killer has yet to accept responsibility for his actions that day, that he was driving too fast and was illegally passing on the right when he struck Phillip.  I’m saddened and angered by this lack of responsibility, but I’m not surprised by it.  Our car-centric culture has a tendency to absolve drivers of responsibility and blame the victims of car violence.  If you doubt me on this, next time you see an article describing the death of a bicyclist, read the online comments.  The callous victim-blaming will sicken you.

I was heartened to see Terry Tornek, a Pasadena city council member, attend the event and speak on behalf of making the streets of Pasadena safer for all people, not just motorists.  I’m also heartened by the people from the Pasadena Complete Streets Coalition, formed in response to Phillip’s death last year, who organized this event.  PasCSC continues to grow and is now lobbying for an ambitious new mobility plan for the city of Pasadena.  Indeed, many members of the coalition (as well as the LACBC, CICLE, BikeSGV, Walk/Bike Glendale) were there last night.  I’m also heartened that members of this small but growing advocacy community have neither forgotten Phillip nor lost hope that things can change—must change.  In this way, bearing witness and looking forward go hand-in-hand.

As Danny Gamboa said last night, we must never forget those killed or maimed by cars and we must work for the day when we no longer need ghost bikes because our streets will be safe for people on bikes.  I made a solemn pledge to Phillip’s mother that this is what I would do.