Archive for the category “Uncategorized”

When local governments do little to make their cities bike and pedestrian friendly, I have often been quick to criticize. Sometimes I do a lot of criticizing, because so much still needs to change to enable the transition to a healthier, safer, more sustainable, more equitable transportation system.  But when cities do the right thing, as Pasadena did last week, I want to give credit where it’s due and offer fulsome praise in the hopes that it encourages additional positive steps. Sometimes both happen at the same time, and thus my praise will be tempered with some constructive criticism.

Pasadena recently painted new buffered bike lanes on Sierra Madre Villa in east Pasadena between Foothill and Orange Grove north of the Gold Line Station. This road diet improves safety along a notorious stretch of road, and provides buffered space for cyclists to ride to and from the retail and residential zones to the north of the station.  Some may recall that this blog has called for a road diet on this street, so it is nice to see the city make this street safer for all.

This safety improvement is especially important with the Metro Bike bikeshare program set to expand into Pasadena.  The retail area is still way too car-centric and these lanes abruptly end at Foothill and Orange Grove, limiting their usefulness for those who might not feel confident riding on those busy surrounding streets, but it is most definitely a step in the right direction, and Pasadena DOT and Councilmember Gene Masuda are to be complimented for their support for this project.

If bike lanes are extended north to Sierra Madre Blvd and South to Colorado Bl. extended east and west on Orange Grove and Rosemead Bl., a network of bike-friendly streets would exist for the first time in east Pasadena. Once this happens, the area would become bikeable not only for self-identified “cyclists,” but for everyone.  There is much latent demand for bike friendly streets in east Pasadena. There are parks, schools, offices, and a major shopping/dining area nearby. With the eventual addition of more transit-oriented development (TOD) around the Sierra Madre Villa Gold Line Station, the demand for walkable, bikeable streets in this part of Pasadena will likely grow.

Despite improvements such as Sierra Madre Villa, Pasadena still lacks a connected network of bike-friendly streets. Riding on N. Hill in central Pasadena recently (see photo), within the space of two blocks I was aggressively passed by two motorists, one of whom impatiently honked at me for good measure. I was legally riding on the right half of the right-hand lane, but there is no bike infrastructure on north-south streets in this part of town, and the low-level aggression from motorists makes the experience unpleasant for anyone on a bike.

N. Hill, Pasadena. Parked cars on the shoulder forced me to ride the right-hand lane.

I brushed the incidents off as a “normal” part of riding in the city (I even gave the honking motorist a friendly wave), but the city cannot expect most people to feel comfortable on streets where they may be subject at any moment to vehicular harassment—or worse. The only way to accomplish this is to create a contiguous network of complete streets, well marked and intuitive to follow. This network must allow people to get to desirable destinations safely on foot or by bike.

Yes, education, encouragement, and enforcement are elements of a bike-friendly city, and I don’t suggest ignoring those, but the contrast between the streets with and without bike lanes shows there is no substitute for bike and pedestrian friendly infrastructure. In short, good things are happening in Pasadena, but we still have a way to go before city officials can claim city streets are “bike friendly.” 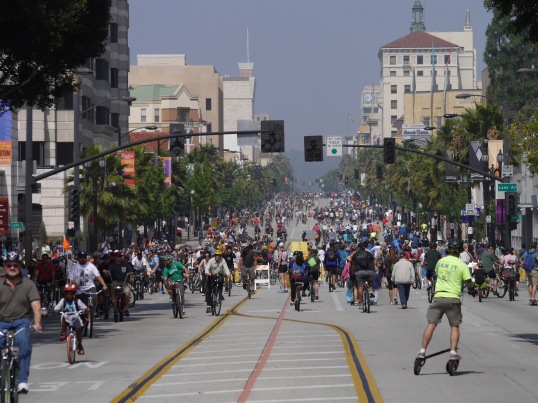 It has been a while since I’ve attended CicLAvia, but with this one practically in my backyard, I could not resist.  It was the first ever CicLAvia outside the city limits of LA (and not the last) and the first one I attended with my whole family.  As we rode to the event, we encountered others headed to the event.  As we got closer, we saw more people, different ages and cycling abilities (i.e., not “cyclists”), and families with children who were headed to CicLAvia.  We waved, smiled, and exchanged pleasantries.  I always get excited as I see more and more people on different kinds of bikes headed to the open streets, like we are headed to a gathering of the tribes, distant kin on the same pilgrimage.  As always, it seemed everyone had a smile and the crowd represented a huge, diverse cross-section of Southern California.  As always, there were lots of families, lots of people of different ages, colors, backgrounds.

I loved observing my wife and kids experience the delights of car-free streets and the sense of community that pervades CicLAvia.  My 15-year-old daughter, who rides to school with me each Monday, was awed at the sight and feel of Colorado Blvd filled with cyclists.  “This is so cool,” she said as we cruised the Boulevard.  “I wish it was always like this!”  Uh-huh, I smiled.  My wife, something of a chatty Cathy, particularly seemed to relish the conviviality of the event, striking up conversations with what seemed like every other person on the route.  After lunch at a local restaurant, as we rode up Raymond Ave next to a young couple who were singing a Maroon 5 pop song, my wife spontaneously joined them singing the chorus (much to the embarrassment of my daughter).  I smiled at the serendipitous, joyful human connections people make when they are released from dependence on their rolling isolation chambers.  Just another CicLAvia moment.

This particular route was only 3.5 miles, the shortest CicLAvia to date, but since we rode there and back home, it didn’t seem too short to us.  There were local “feeder rides,” sponsored by a variety of groups, but I’d like to see a greater effort to get even more people to and from the event on their bikes, so that more of the surrounding streets become informally “CicLAvia-ized” on the day of the event.

I’m a huge fan of such Open Streets events not only because they’re wonderfully fun and allow everyone to connect with their community in ways they cannot in a car, but because they also enable people to experience the freedom of car-free streets.  When I asked my son what he liked best about CicLAvia, he told me it was the freedom of being able to ride around town “and not have to worry about cars.” 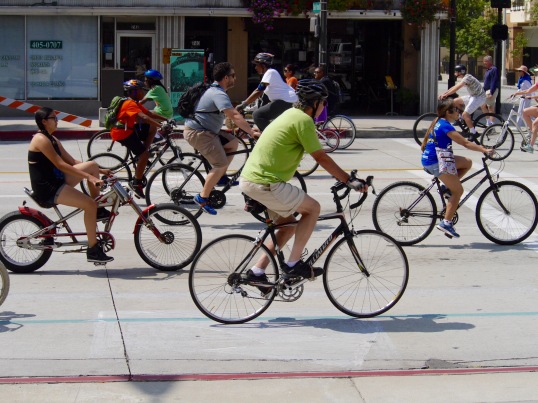 This experience, I believe, is potentially subversive of the domination of our public spaces by the automobile, and offers an immensely popular signal to political leaders that people hunger for car-free streets.  As the open streets movement expands and becomes a regular part of the Southern California landscape it may alter people’s perceptions of what streets can be and expand their understanding of mobility beyond the automobile.

On our ride home, when I asked my son what he thought, his one word answer: “Awesome-tacular.”

I haven’t posted on this blog for a while and it’s time to get back to it.  Partly, my absence has been to the usual things: work, family obligations, the busyness of life.  On the other hand, a couple of weeks ago I’d penned an angry rant about the average suburbanite’s laziness and unwillingness to get their fat asses out of their cars—even for their kids’ sake, but ultimately decided not to post it.  I wrote it at a low point, mostly as therapy.

My frustration stemmed from the low turnout at a bike festival I had put together to provide a free bike skills class at the local middle school.  After busting my tail to put this thing together, the turnout was anemic, and I couldn’t get any parents from the middle school to step up and help boost turnout.  A parent advisor for one of the student clubs who’d agreed to have some students paint a banner to publicize the event completely flaked out on me, and I wound up paying for flyers out of my own pocket.  Other parents to whom I’d appealed to bring their kids were no-shows.  I felt angry.

I’ve decided to look at the bright side, however.  The bike safety event at least provided an opportunity for a small number of students to learn safe bike skills and, while we had more instructors than students, it was still a fun event.  Jim Shanman of Walk n’ Rollers, a Culver City-based organization that puts on such events, and volunteers like Jackson, Nikki, Andrew, and Chris from Bike San Gabriel Valley, a local advocacy organization, put together a great program. The students who did participate really got a lot out of the experience, and I enjoyed watching them gain confidence handling their bikes, learning some basic maintenance and riding safely.  The compliments I got from the local Rotary Club that funded most of the event, the local PD, and  the school principal helped ease the frustration of dealing with apathetic parents.  And, at least there are a couple more kids in town who know how to ride safely and have more confidence doing so.  A follow up email from Jim Shanman lifted my spirits, too.  Really, if anybody wants to put together a youth-oriented bike event, contact Walk n’ Rollers.  They’re terrific.

The morning of the event, when I saw how few kids had brought their bikes to school, I swore I’d never do it again, but I’m at the point where I’m willing to consider trying again.  Maybe getting an earlier start with the local PTA and the student body leaders at the school.  Maybe I’ll take a different approach and make it a community event next year.  At any rate, I’ve decided I’m not going to give up.

It’s going to take a long time to break the stranglehold of the automobile on our suburban culture, but the change is necessary for so many reasons and youth are integral to changing the culture.  Next year, I’ll build on what I’ve learned and the event will be better.  It’s like learning to ride a bike.  If at first you don’t succeed ….