An estimated 100,000 people enjoyed 9 miles of car-free streets in L.A. yesterday at the fifth CicLAvia, L.A.’s recurring street party.  Those who have experienced it understand what an amazing feeling it is to enjoy the city by bicycle, without fear of having to tussle with cars.  Those who’ve experienced it understand the pleasure of gliding along some of L.A.’s usually-gridlocked avenues absent the constant thrum of engines, where the only sounds you’ll hear are the whisper of bike gears, laughter, conversation, and the occasional bicycle bell. 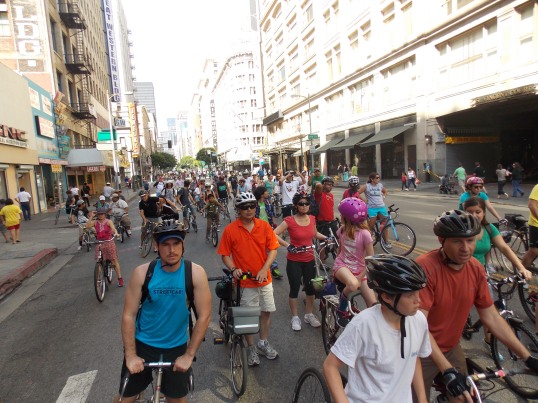 One of the things that leaves a lasting impression is the sheer volume of bicycles that are able to move smoothly through the streets of the city during CicLAvia.  Consider the traffic nightmare that would result from dumping over 100,000 cars onto 9 miles of L.A. streets all at once and you begin to understand the subtle ways in which CicLAvia changes our perception of what efficient use of street space is.  Indeed, that is perhaps the most radical, if not subversive aspect of CicLAvia:  it alters our understanding of city streets and what they might be used for.  Turns out, if you make some streets for people, not cars, they turn into space for play, exercise, socializing, and efficient transit from one place to another on foot or on two wheels.  It’s this re-imagining of urban space that reflects one of CicLAvia’s greatest achievements.

The other achievement is to break down the invisible walls that separate communities when they are bisected by roads that become impassable rivers of steel and concrete.  More than one participant I talked to yesterday remarked how they had never noticed L.A.’s people, its neighborhoods, or its architecture like they did from the vantage point of a bicycle.  Freed from having to watch for cars, they could look around, listen, and appreciate their surroundings.  For my part, CicLAvia has made me feel a deeper connection to L.A. than ever before.  I especially like the way CicLAvia provides a means for this middle aged white man from the suburbs to get to know the people and communities in South L.A., Boyle Heights, Little Tokyo, Chinatown, and everywhere in between.  It’s not just the places, it’s the people in them that I feel more connected to. 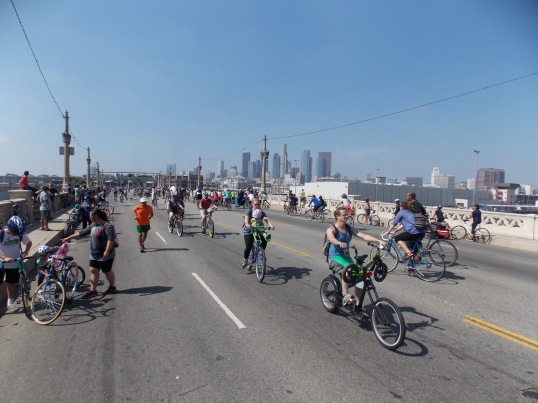 All of which reminds me that, while the automobile has brought certain benefits to society it has also impoverished us in ways we don’t often consider.  We are all enriched by the conversion of some street space to car-free space. 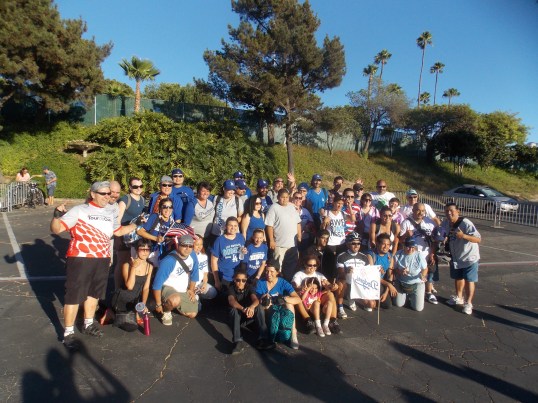 Yesterday, I had the pleasure of participating in what I hope will be the first of many bike rides to Dodger Stadium.  The inaugural Dodgertown Bike Ride was a wonderful, easy-paced 4-1/2 mile ride from Lincoln Park in East L.A. to Dodger Stadium, where our group of about 50 bicyclists enjoyed free bike parking and (perhaps best of all for Dodger fans) watched the Dodgers beat the Arizona Diamondbacks 2-1.  To get to Lincoln Park, my son and I took the Gold Line from Pasadena to the Lincoln/Cypress station and rode through the Lincoln Heights area, which gave us a nice tour of a part of the city I had not visited in many years.  There is an Old L.A. charm to the neighborhoods on the Eastside, and the bike is a wonderful way to experience it.  After the game, the group took a leisurely route back through downtown L.A., taking in the sights and sounds of the city on a pleasant summer evening.

The ride was the brainchild of Carlos Morales, president of the Eastside Bicycle Club, and an inspiring advocate for cycling as a way to improve physical fitness, especially for youth in communities of color.  Morales is himself an example of the regenerative power of bicycling to improve health and well-being, having used his bicycle riding to overcome obesity in his own life.  He and the other club members have created a wonderful community organization that encourages people to get on their bikes and have fun.  It is an inclusive, friendly group that is open to all, and makes everyone feel welcome.  I think the group has a deep pride in its community and a warmth that exemplifies the best of East L.A.  You don’t have to be a racer, don’t need the latest bike gear, or the fancy lycra outfit.  Their philosophy is to ride, have fun, get exercise, and be safe.

The Dodgertown Bike Ride is a great way to show Angelinos that they need not rely on the car to get to Dodger Stadium, and the first time in the 50-year history of the stadium that such a large group of fans has bicycled to the stadium for a game.  The Dodgers organization made everyone feel welcome and stadium staff provided us with a parking area right next to the stadium entrance.  With bicycling becoming increasingly popular as a form of transportation in L.A., I have a feeling this ride is a harbinger of more good things to come from the Eastside Bicycle Club. 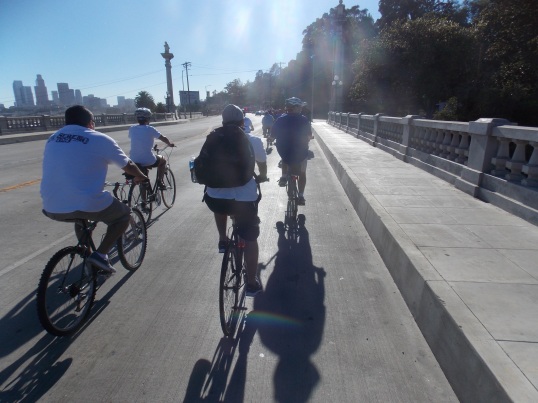