Bikes and Transit in San Diego

Last week, I had the opportunity to go car-free in San Diego when I attended a conference at the Joan B. Krok Institute for Peace and Justice at the University of San Diego.  My commute to the conference involved the San Diego Coaster commuter train, the San Diego Trolley, and bicycle.  The trip reinforced for me the way in which well-designed transit can liberate us from the car and its stresses.

The North San Diego county transit authority runs the Coaster, which took me from Carlsbad, where I was staying, to San Diego’s Old Town transit station.  The Coaster is a very comfortable, clean, pleasant commuter train that provides space for bicycles on most of its cars.  You can bring your bike on board and then settle in for a beautiful view of the San Diego coastline as you head south.  The train veers inland for the final part of its journey to downtown San Diego, after it passes the Del Mar racetrack, but the desert views it affords are beautiful in their own way.  Last summer I took my family on the Coaster for an outing to Coronado Island.  That trip, we brought our bikes, got off at the historic San Diego Santa Fe station, boarded the nearby Coronado ferry with our bikes, and spent a beautiful summer day exploring Coronado by bike.  I’d be making this particular trip for work, however. 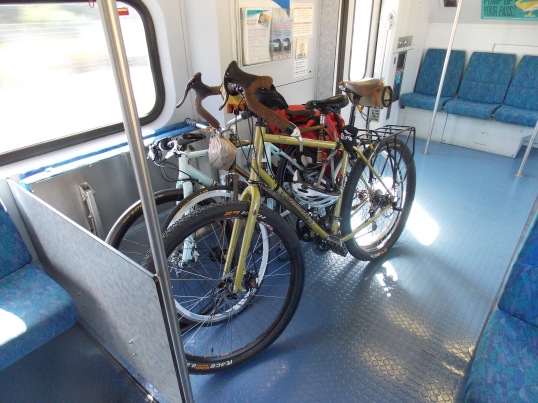 When I boarded the train in Carlsbad, I found a car with space for my bike and secured my bike with the adjustable straps provided on the train (if you’re traveling with other bicyclists I would suggest bringing a bungee cord to secure several bikes together on the train).  Two other cyclists also boarded my car and that is how I met Matt, who works at Adams Avenue Bike Shop in San Diego, who basically lives car-free and commutes on the Coaster when he’s not riding the 50-odd mile route to San Diego on his bike.  Soon we fell into a friendly conversation about car-free living and the challenges of getting Americans to wean themselves off their car addiction.  To be clear, reader, most of us may still need a car on a regular basis, but there is no reason that many more of us, if not most, can reduce the number of car trips we make by using bikes and transit instead of our cars.  It is not only possible, it is good for our health and necessary for the health of our communities and our planet.

What is more, my trip on the Coaster was much more enjoyable than driving.  I thoroughly enjoyed my conversation with Matt, in which he told me about his upcoming long-distance bike tour next year and I told him about what is happening with bicycle advocacy up north In L.A.  The train ride passed quickly and we exchanged emails and good wishes, and I realized that our conversation would not have happened had we been in cars on the congested 5 Freeway, illustrating another benefit of transit.  Transit, as Taras Grescoe has shown, enhances social life, cars destroy it. 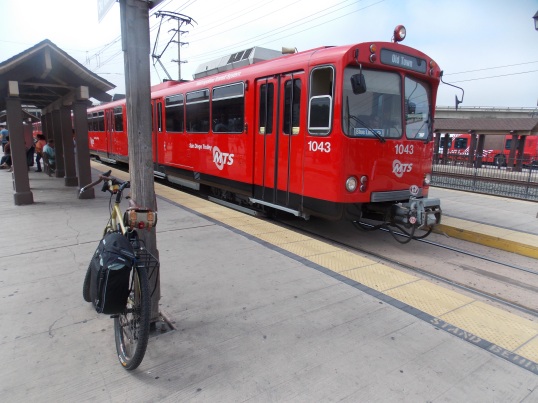 Arriving at the Old Town station in San Diego, I quickly boarded a green line trolley with my bike and took it to the Morena/Linda Vista station, which is about half a mile to the conference on the USD campus.  I could probably have walked it, but the bike made it a quick 5 minute ride, and I locked my bike at one of the conveniently located bike racks on campus, removed my messenger bag from my pannier (no sweaty back), and headed into the conference (I did bring an extra dress shirt in my pannier, just in case I had arrived sweaty, but the ride from the trolley station was so short, it was not necessary).  Several conference attendees were surprised at the ease with which I was able to get to the conference without a car, and others had been unaware how close the trolley station was to campus.

My return trip was every bit as easy, and I not only felt a sense of independence that came from being able to get where I needed to go without the hassle of a car, but felt glad that I’d been able to make a new friend in the process.  With transit and bicycling, initially you’ve got to plan ahead a little bit, coordinate with train schedules, and map out a bike-friendly route (especially if you’re not familiar with the area), but this is fairly easy to do online, and the benefits more than repay the time investment.  I was able to access transit schedules online and google maps provided bike-friendly directions to my destination.  While I did this trip from Carlsbad, my L.A. friends could just as easily make the trip from L.A.’s Union Station, taking the Amtrak Surfliner to San Diego.

Take it from me, formerly a car-dependent Southern Californian, bikes and transit are easier and more fun than you think.  Next time you’re headed to San Diego, give it a try.